For many years, I’ve kept a secret that only my close family and a few open-minded friends know. But I feel it’s time to be honest with all of you, because you deserve to know who I really am. No more avoiding the subject. No more smiling politely and remaining silent when the topic comes up in mixed conversation. No more avoiding family gatherings because I’m afraid someone will call me a derogatory name.

That’s right folks, I’m a lefty. I curl my left hand over when I write. I use left-handed scissors. I catch with my right and throw with my left. My mouse buttons are backwards. I can’t use spiral-bound notebooks.

I can remember when I was a little boy, and I first realized I might be left-handed. I was coloring with all the other kids in kindergarten, and it just didn’t feel natural to me. But I just knew in my heart that something just was missing. The crayon felt awkward in my right hand. Across the table, I made eye contact with another boy, and I could tell he felt the same way. Call it intuition, or maybe some kind of radar. When nobody was watching, we quietly slipped our crayons into our left hands and colored. It was glorious. For the first time in my life, I just felt right, er left…you know what I mean. 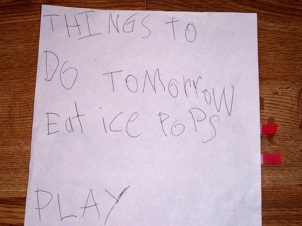 Maybe I just didn’t give being right-handed a chance

For a long time, I tried to ignore it. I tried to forget how wonderful it felt to use my left hand, how much easier it made just about everything in my life. With my left hand, I could butter my bread, comb my hair, and even write my name legibly. By the time I was six or seven, I couldn’t deny it any longer. Besides, people were worrying I had some sort of palsy. I finally had to tell my mom that her only son was a left-handed. I was so worried, but she just smiled at me. “I know,” she replied with tears welling up in her eyes. “Somehow, I’ve always known.” She hugged me close, and I felt validated.

Thankfully, my parents were supportive of my alternative lifestyle, even when my grandmother tried to discourage it. “Better put an end to that boy using his left hand,” she protested. ”He’ll never fit in.” She actually suggested tying an oven mitt over my left hand. That’s supposedly how they handled odd behaviors back in her day, when folks wouldn’t put up with such nonsense.

When rumors started circulating at our church that the Edwards boy was left-handed, people called me all sorts of horrible names like “sinister,” “southpaw,” and “commie.” Parents wouldn’t let their kids play with me anymore, because they were afraid I might turn them into lefties, too. The minister cited Bible verses that he said clearly demonstrated how God favored the right-handed. You know what? Turns out that hypocrite was a flaming lefty his whole life! Anyway, we stopped attending services shortly thereafter.

Participating in sports was always tough for me. In baseball, I had to use a special glove and stand on the other side of the batting box. But the stereotypes were definitely the worst part. One day, I heard my own father tell the coach, “Why don’t you put him on first base? His kind is really good in that position.” His kind?! Is that how my father sees me now? I know I’m still his son and he loves me, but things between us have just been different ever since. In my heart, I know he’d prefer a normal, right-handed boy to make him proud.

I found acceptance among my friends. They didn’t care that I held my fork backwards or couldn’t drink from a regular mug. But I was still living a lie.

Once I got to college, the world really opened up. There were clubs and bars that were friendly to people like me. Most of my professors were openly left-handed, and I learned that many famous politicians, artists, and intellectuals have been left-handed throughout history. I discovered that there are a lot of different philosophies in this great, big world, and there are people out there who are into way freakier shit than just being left-handed. I met one guy who did calligraphy…with his feet.

Today, I’m happily married to a wonderful right-handed woman who loves me for who I am and doesn’t judge me, because I leave the panhandle on the wrong side of the stove or put my toothbrush on the wrong side of the sink. To the outside world, I appear perfectly “normal.” I’ve learned to golf right-handed, and I wear a watch on my left arm. Thank goodness for computers, because I seldom have to bother writing with a pen or pencil anymore. In our home, we’ve decided that we’ll be open with our kids about handedness, and if one of them decides to become a lefty, we’ll just accept it. But I better not catch them trying to be ambidextrous, cause that’s just plain wrong. Sorry if that sounds judgmental, but you gotta draw the line somewhere, people. 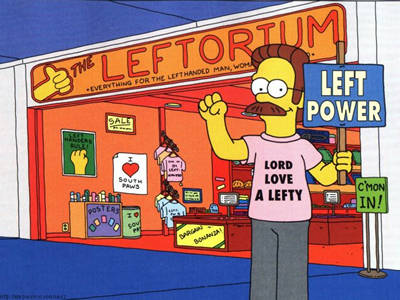 Contrary to popular opinion, left-handed people are not more likely to have moustaches

Yes, society has come a long way in how it view us lefties. Studies have found that around 10% of people are left-handed, and while evidence suggests lefties are just “born that way,” others believe it’s a conscious lifestyle choice. Isn’t that just ridiculous?

Nevertheless, it’s becoming more mainstream every day. We even have our own observance day, August 13. In larger cities, you might find people marching in a left-handed pride parade. No longer can you be discharged from the military for being left-handed. We’ve even had left-handed presidents. But we still have a long way to go. For instance, did you know that most public places are not required to recognize left-handedness? Desks in our public schools are right-handed. Doors across this great nation are designed to be opened with the right hand. People almost universally offer you their right hand to shake. Cup designers still put the handle on the right. Books are designed to be read left to right. In most churches, you can forget about being accepted if you’re openly left-handed. Lefties can’t even hold public office in Tennessee (no wait, that’s atheists). Did you know there’s even a chicken restaurant that openly opposes left-handed people on moral grounds?

3 Replies to “Coming out of the closet”

This site uses Akismet to reduce spam. Learn how your comment data is processed.

I'm a technophile, media junkie, and self-described "swell guy." I live in Knoxville with my wife and 4 kids. I'm a technical writer and a Microsoft MVP.

Looks like somebody has officially climbed to the top of the evolutionary tree. #DogLife
There is 1 imposter #AmongUs.
Cats
For a COVID-19 anniversary gift, I got vaccinated. One down, one to go.
Spring is in the air!
"Maybe the world is broken because you don't trust anyone." - Sisu, #RayaAndTheLastDragon
Loading Comments...
Comment
×
%d bloggers like this: