This week, I received a much-anticipated invite to try out Google Voice (cue choir of angels). It rocks, folks, and it rocks hard…

For those of you who aren’t familiar, Google Voice (GV) a beta VOIP service that provides a free US phone number in your local area code and then allows you to configure as many of your personal numbers as you like behind it. One number to rule them all, so to speak.

Here’s a typical interaction: when someone calls your GV number, it asks the caller to state their name (based on your configuration), then routes the call to your various numbers, according on your schedule and preferences. For example, I can tell GV to ring my work phone during the week, and my home phone during nights and weekends. For those times when you’re strictly off limits, there’s also a simple DND feature, which sends the call directly to voicemail. All of the options can easily be configured via your phone or the web.

Assuming you answer the incoming call, GV plays the caller’s name (it automatically remembers contacts and previous callers) and asks whether you’d like to take it or send it to voicemail. If you do take it, then voila, you’re connected and GV steps aside (unless you want it to record the call). On the other hand, you elect to send it to voicemail, then it plays a custom greeting for the caller (you can even have different greetings for different groups of contacts) and takes the message.

I know it sounds like a lot of steps, but it’s quite simple for both the caller and receiver to manage. Other than stating their name and waiting while the service attempts to make the connection, your caller isn’t aware of GV. And your only interaction is to listen to the caller’s name and decide whether to take the call.

When GV takes a message, that’s when the real magic happens. 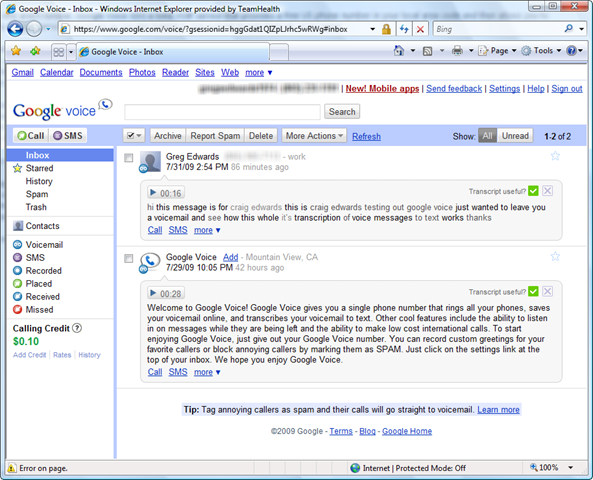 Each voice message is playable via your phone by dialing your own GV number or via the web. On the web, GV presents a “visual voicemail” inbox, which looks and behaves like a standard e-mail inbox. Messages are listed by caller, date/time, etc., and you can click any message to play it instantly. You can even listen to messages while they’re being recorded. Messages are also transcribed automagically (with about 85% accuracy in my limited experience), and within a few minutes you can read the message as well as hear it. Replies can be voice or SMS-based and can be managed effortlessly via your phone or the web.

When returning a call or placing outbound calls via the web, GV will dial the number and then connect with the device of your choice (mobile, work, etc.). Oh, and GV also lets you make international calls for about 1¢ per minute.

It still uses Google’s traditional “Fisher-Price” themed interface, which I hate, and there’s also the question of what number is displayed to recipients when you use GV to return calls (unless you’re very careful about how you place the outbound call, you can easily expose your actual device number). But you can manage a fair amount of basic configuration via your phone.

This site uses Akismet to reduce spam. Learn how your comment data is processed.

I'm a technophile, media junkie, and self-described "swell guy." I live in Knoxville with my wife and 4 kids. I'm a technical writer and a Microsoft MVP.

I love the versatile modular design of the @Microsoft Designer Compact Keyboard and Number Pad, but I feel like they missed an opportunity by not including magnets to allow these to snap together.
All is Bright tonight in Farragut! #Frozen
Sarah's third grade "turkey in disguise" project, Butterball Fatt... pilgrim hunter.
Lick the pot of life.
Aidan is the Herschel Walker of socks.
I love autumn.
%d bloggers like this: